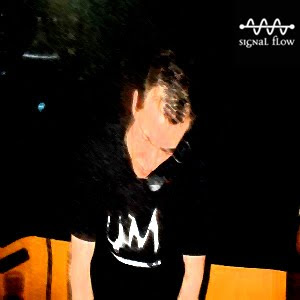 The 14th episode of the Signal Flow Podcast mixed by Deathmachine!

I'm happy to announce the next podcast by Deathmachine from London! He's had some great releases on labels such as Corrupt, Rebelscum, Deathchant, Pacemaker, Industrial Movement, Sadistic, and many more! He's prepared a great mix for us and I hope you enjoy it!

Here is a little bit about him:

Deathmachine's love for hard dark music started way back in the early 90's where his imagination was captured by the then relatively young hardcore scene. He attended many of the big UK raves over the following years and became addicted to the new sound that had arrived.

To further connect with the music, he started DJing in 1998 and over the following years began carving a unique sound for himself. Always dance floor oriented, but with an experimental edge, his sets earned him bookings from all major promoters across the UK.

A few years later and now a respected name on the UK DJ circuit, he took it to the next level. In 2001, he began producing, aiming to capture energy and rawness along with the continuing dark vibe. Since then, he has released on some of the worlds most respected industrial hardcore labels such as Deathchant, Rebelscum and Pacemaker.

Thank you for listening!
Posted by Signal Flow at 1:37 PM 1 comment:

The 13th episode of the Signal Flow Podcast mixed by The Relic!

Now at the 13th episode of the Signal Flow podcast I have Maurice (The Relic) and I'm happy to have him on board as I'm a fan of his productions.....expect some slow dark industrial madness in this set! Here's a little about him:

The Relic released his first e.p. on FIX records 17. His second release was a battle with Zanthrax on Underground Society Records 08. At the end of 2006 he became main producer for the SYMP.TOM label, a sub-label of Neophyte records. Together with Mental Wreckage he set up a project called: Dual Mechanism. With this new project they mainly focus on raw, mechanical sounding tracks.

Check out his latest release on Symp.tom - The Relic - The Fallen


Thanks for listening!
Posted by Signal Flow at 10:55 AM 2 comments: